Wendice Prana is a sorceress on a neverending quest for power.

In pursuit of new and greater sources of magic, she enters the service of the mad wizard Abeloos Casserly, assisting him in his own search for the secret of eternal life and youth. Her behavior during this time stands in stark contrast to that of Abeloos' other lieutenant, the berserker Dorgius. Even when attacked, Wendice prefers to avoid bloodshed, paralyzing or disabling her opponents long enough for her to escape. However, this does not prevent her from helping Abeloos acquire prisoners, knowing full well that he will use their blood to fuel his magic.

Though she knows better than to implicitly trust her "master," Wendice does not fully understand how dangerous the wizard is until she sees Dorgius' final battle with Celica; in response to the berserker's request for power, Abeloos sealed a demon within his axe, giving him superhuman strength but gradually eating away at his soul. Correctly surmising that she too will meet a similar fate, she enters into an agreement with the angel Ilzave, warden of the Old God sealed beneath the complex in which they live, who offers her unimaginable power.

Not realizing that the angel is merely using her, Wendice challenges Celica in the room Ilzave has designated for her use. However, the power she channels proves to be too much for her human body to endure. After defeating her in combat, Celica is force to siphon off the excess power to prevent her from being destroyed; at the same time, he places a geas upon her forbidding her to do harm to others in the future. Realizing that she's been effectively removed from the game, Wendice leaves the mine - but not before she gets a little revenge on her former master by providing Celica with the secret to dispelling his defenses.

Wendice becomes an ally and is a playable character with a large array of element magic attack. As a result, she has her own H-scenes and can be interacted just like every other female character. She likes butthead with Cowra, but it doesn't get anything to a point where it is out of proportions, but has been calmed down by others before. Wendice is the only caster in BG2 to be able to cast Darkness Magic. 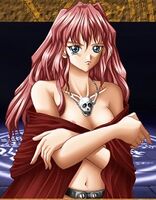