Suri has the ability to use healing and restorative magic; although by no means a skilled fighter, she is nonetheless proficient in the use of guns.

During the events of Battle Goddess Verita, Suri first met Celica in a small village. She is a child who seemed lacking in emotion. When Magician Abeloos Casserly invades the village due to Celica's presence, Suri is the only survivor. Feeling responsibility for the disaster, Celica adopts Suri. After moving to Rewinia, Suri comes under the care of Ekria, Celica's head maid, and soon also become Celica's maid. As time passes, her desire to help Celica causes her to make a contract with Celica as his Apostle. 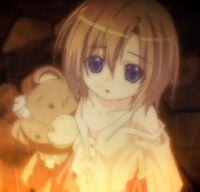 Suri as a child

Suri Card from Arterial of Origins
Community content is available under CC-BY-SA unless otherwise noted.
Advertisement