Saria is one of Celica's four apostles, alongside Suri, Ekria, and Marinia. She possesses an unusual talent for a human - the ability to communicate with spirits.

Saria is an orphan girl sold by her village to be a slave. She was owned by Groc the merchant when she first meets Celica in Milphe, where her chronic clumsiness was the source of much verbal abuse from her master. After seeing a griffin fly over town, Groc commissions Celica to acquire a griffin egg. When Celica returns with the egg, Celica lets Suri pick what she wants from Groc's store as the reward. Being an orphan girl herself, Suri symphatizes with Saria, and makes Saria her choice. Groc agrees.

While Saria adjusts to her a new life under a new master, Suri takes the role of her elder sister. However, due to her past, she had a fear of being discarded by Celica, to the point where she even offers him sex just to be of use to him. Even after being reassured by Celica that he will not discard her, and that he has use for her unusual talent, she still wishes to be of more use to him. At this point Suri advises Saria to offer herself to Celica as his apostle. Celica accepts her offer.

Upon their return to Rewinia, Saria joins Celica's circle of apostle-maids, assisting Suri with her domestic tasks around Celica's mansion. Although weak in combat, she seems to have an innate talent for summoning magic. 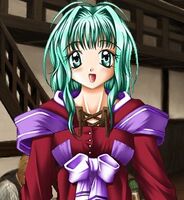