He is known for charging extortionate interest rates and collecting on his debts with the assistance of a group of hired thugs. However, he is far more infamous for his sick interest in little girls, and his use of similarly underhanded tactics to place them in his debt. His esteem among his men seems to be nearly as low as the townspeople's.

During Battle Goddess, his eye falls on the former slave girl Saria as she's out running errands for Rinsha. He orders one of his men to pick her pocket for the money Rinsha lent her, then steps in and offers her a loan. Shortly after this, Rudonne's men whisk her off to his mansion, where he informs her that due to the ten-thousand-percent interest rate he charges, she now belongs to him. No sooner does he announce this than Celica tracks Saria down. When Rudonne triumphantly shows him Saria's entry in his ledger, he realizes that Saria - who is only just learning to write at this time - wrote Celica's name instead of her own. The loan is declared invalid, and Celica takes Saria from Rudonne's mansion by force - in the process, revealing Rudonne to be a masochist on top of his other qualities.

The usurer's underlings stand by and watch as this happens. 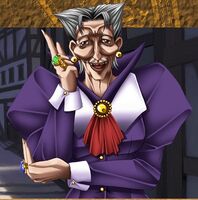 From La DEA
Community content is available under CC-BY-SA unless otherwise noted.
Advertisement