Niu is a dancer for a caravan of traveling performers which arrives at the town of Milphe during the Rewinian mission there. She's something of a big sister to the impulsive Lakche.

Like the other women with the caravan, Niu keeps a side job as a prostitute. She insists that Lakche isn't old enough for such things, however (despite the younger girl's protestations), and doesn't approve of her interest in Celica.

Despite her profession, Niu is the only female character in Battle Goddess with no special CGs. 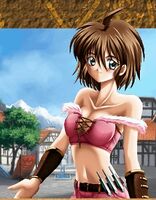 Niu in BG1
Community content is available under CC-BY-SA unless otherwise noted.
Advertisement