Kiryuu is a poor high school student living with his sister Natsumi. One day, on the roof of his school, he notices that the school president, Sakura, is being assaulted by a male student called Banchou. After beating Banchou, Sakura, seeing his potential, asks Kiryuu to become the school president so he can participate in the inter-school competitions; he decides to think about it. These competitions absorb the losing school into the winning school and the losing president must fulfill one condition that the winner imposes.

Once he gets home, he sees on the news that the local government is willing to pay large amounts of money for parents to have children as to combat the declining birth rates. When his sister gets home, she gives him what she thinks is a good luck charm, but is in fact an easy delivery charm. Putting this all together, Kiryuu thinks of a plan to win against other schools and force the representatives to become his wives in order to get lots of money from the government and escape poverty. The limitation of this is that it takes a long time and is very expensive to raise children.

On a whim, he goes to visit a shrine and he meets a fertility goddess named Angeline Ishtar, who has lost most of her power because people aren't having many kids anymore. Seeing Kiryuu's potential, she decides to help him by changing the apparent flow of time and making girls that he impregnates have five year old looking children within days of conception. With all this in mind, he takes up Sakura's offer and becomes the school president so he can protect his family, make a large family and escape poverty.

The gameplay of the game can be described as Bumper Cars. The main objective is to move your character around while knocking-off enemies of the stage platform. However, other objectives include King of the Hill, Race or Tag. Each playable character has 4 different stats (Control, Speed, Guts, Weight), a Spirit meter value, a deployment Cost, and a special Skill. Daughters provide bonus to the main stats as well as an Auto Skill, but can also increase the Spirit value and deployment Cost. On each Scenario there are also Items that can increase/decrease stats, fill the Spirit meter, give extra Banchou Points or explode.

The game protagonist and starting character. Lives only with his sister Natsumi after their parents died. After a small misunderstanding with her, he decides to unify the city schools and have as many children as possible in order to help Angelina recover her powers as well as having financial aid for child care.

The Goddess of Fertility and Child Birth. She helps Kiryuu unify the city schools as well as having an easier time having children by speeding up the pregnancy of the girls and first years of each child.

Natsumi's best friend. She has a wealthy family and has know the Manami siblings since childhood. A Tsundere-type of girl. Her daughter name is Misao.

A playful girl who loves candy. Although she is already in Highschool, she has the looks of an Elementary school girl. Her daughter name is Mirai.

A Stoic girl and master swordsman. She is easily embarrassed when it comes to love. Her daughter name is Kotone.

A girl bound to a wheelchair, she seems to have low self-steem and complains a lot. Also has wealthy family. Her daughter name is Hina.

A very tall girl. Quiet, kind and good at sports. Her daughter name is Moe.

A magician girl. She is a weird type of girl that is constantly trying to device new spells. Her daughter name is Ayaka.

A maid assassin originally targeting Kiryuu. She ends up joining him after her defeat. Her daughter name is Non.

The original school representative of Kiryuu's school and the second character to join.

Ouka's geist familiar. Looks like a regular hand puppet. He is a playable character on the Tech Gian version of the game.

Meishoku no Reiki's female protagonist. Makes an appearence as a DLC character. Her daughter name is Seobitt.

An advance military robot. She is able to reproduce with humans. A DLC character. Her daughter name is Robokoko.

A Highschool Idol. His father is also her manager. Also a DLC character. Her daughter name is Miruku.

Ouka's older sister. Pierre calls her Maou (Demon king). Only appears on the Tech Gian version of the game.

Anastasia's mascot. A rather clumsy maid that joins on a new game+. 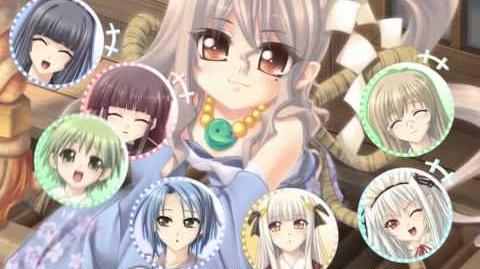