Maid in Bunny is the 2nd game of Eushully.

"Crook Kingdom" (くるっく王国), a remote region of the continent of Raulbhach. It was once a small country surrounded by demon controlled territory, where nevertheless men and women lived peacefully.

There, within Crook Kingdom's castle, a member of the Usaji (Rabbit-Eared) Tribe named Elena was working as a maid. Despite Usaji tribes-people being rare in this country, her constantly being referred to as Prince Cal's "Special Maid", and her cruel treatment at the hands of the other women of the court, Elena managed to live a happy life.

Until suddenly, what's this? Out of nowhere, the Grand Wizard Rosalia appears, steals a magic ring from the castle's treasury, and turns the royal family into stone in order to lay claim to the castle! Thrown from a castle window by the evil wizards, Elena, with the help of the white mage Yuri, must now journey forth in order to rescue the prince.

In the introduction of this game from 2000, the story takes place in Raulbhach (らうるばーしゅ) continent, still written in hiragana, which actually became the later "ラウルバーシュcontinent" in katakana. This notion, combined with the fact that the atmosphere of the game is totally different from other Eushully titles, led to speculations that “this” Raulbhach continent could have been a parallel world.

However, since there was a description of "Maid in Bunny" in the chronological table of Battle Goddess VERITA’s guidebook, it turned out that it was actually a work incorporated in the official history of Dir Lifyna.

Despite this, Eushully's current canon does not count "Maid in Bunny" as a game set in Dir Lifyna, and the Bunny-Eared Tribe does not appear again. Thus, it seems logical to regard this early work with a peculiar art style only as a short page of Eushully's early history.

Before starting the game, you should update to Ver. 1.06 (page here or in the links below). It fixes several bugs in the game, including an instance in which you can get stuck in one of the later dungeons. Depending on your browser, you may need to save the patch by right-clicking on it in the download page. 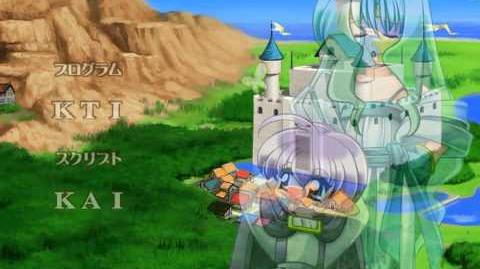