Sir Lefin is Levia's second-in-command in the White Dragon Knights.

He is quite tall for a Rewinian, making him somewhat awkward (particularly in cramped quarters such as the Cadora Mine). Perhaps because of this, he has a gentle and easygoing personality, which works as a counter to his superior's moods and fiery temper. He often serves as a mediator between Celica and Levia during their complicated relationship, and is quite perceptive of Levia's feelings towards the Godslayer - feelings of which Celica himself is frequently oblivious. 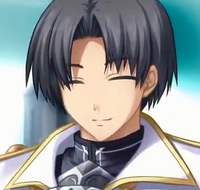 From La DEA.
Community content is available under CC-BY-SA unless otherwise noted.
Advertisement