La DEA of Libra 『天秤のLa DEA。~戦女神MEMORIA~』(Tenbin no La DEA ~Ikusa Megami Memoria~) is Eushully's 15th game. This game will take place as the 5th game in the series of Battle/Princess, as it will replace the original Battle Goddess in canon. As Eushully stated, it's "Eushully's First Remake" of Eushully's first game, 『戦女神』 which was released in 1999:

As far as the gameplay goes, this game is similar to Battle Goddess Zero and Verita in terms of dungeon map and battle system, although the character model in battles changed from SD 16 bit models to normal size model similar to Princess Hunting Dungeon Meister and Kamidori Alchemy Meister.

The packaged edition of the game was released on April 25th, 2014.  No downloadable edition has been announced yet.

Celica Sylphil obtained the body of a goddess through god-slaying. Because of his "sin", he was pursued by all kinds of deities and nations and attracted many assassins who wanted to kill him, until he formed an alliance with the Water Miko, the guardian deity of the divinely ruled country Rewinia.

During the previous battle, the Battle of Dounel, a crisis in which the existence of Rewinia hung in the balance, Celica helped defeat the evil dragon Aracale. As a result, Celica lost most of his divine power, without which his consciousness is unable to effectively suppress the goddess's body, causing it to gradually return to its original female state. It seems that if he were to use up the last of his power, his consciousness would disappear and the goddess's body would awaken.

Amid that situation, with no time to heal his injuries, he received a request from the Water Miko to proceed to the Rerun region and investigate the case of the princess of Rewinia who went missing 18 years ago.

Upon heading towards Rerun in the wake of Rewinia's order of knights which had gone ahead first, he found it was an area in which a giant labyrinth slept, atypical of frontier land. Along with the companions he leads, the Godslayer Celica sets out to discover the hidden truth and regain his lost power.

La DEA of Libra is closer to Verita compared to the original Battle Goddess, although they share the same storyline.

First of all, this is a fantasy RPG, with dungeon travel, battle, and ADV action (visual novel part). 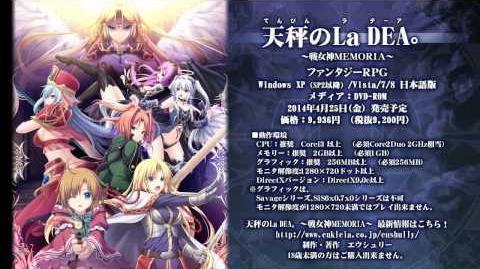