A turn-based tactical battle boardgame set in a universe consisting of only void and floating islands. The player assumes the role of one of the four major characters, all of whom have become air pirates for one reason or another, each with a different storyline, cast of characters, and an air ship with unique characteristics.

Each stage of the game takes place on a map consist of paths of square tiles to travel upon, and with its own success/failure objectives; some stages may have sub-stages with different maps.

During a (sub)stage, each round the player and opponent-controlled airships take turns rolling for the number of squares their own ship move. There are different types of tiles that have different effect on the player when landed upon, such as letting player gain/increase control of the tile (so when opponent land on it, they pay the owner gold), giving/discarding special cards, shop (allows purchase of cards), changing the airship's altitude (affects movement speed and combat bonuses), forced combat with other opponents etc. Passing through certain checkpoints then returning to the starting point provides the player with bonus gold and repairs their airship.

When an airship lands on an already occupied tile, as well as through a few other situations, combat between airship ensues. Combat is divided into three rounds of canon bombardment, where each round each side plays out combat cards of their choice (most are discarded after one use, the default attack equipped on the ship can be used all the time) for each active "crew" of the ship. Damage is determined by the relative altitudes between the ships, stats of the ships for their respective relative altitude (which levels up with experience and/or be boosted with certain cards), and any crew's special abilities.

There are also Event Cards that can be used at the beginning of your own turn, before you move. Their effects range anywhere from position manipulation, roll manipulation, gold manipulation, health manipulation, placing obstructions on the map, and many others. 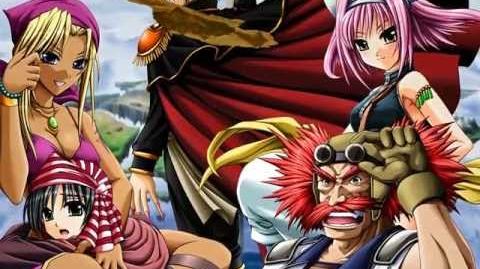