Kuhn Cariester is a priestess of Elyun, and the chief healer in the town of Milphe.

When Kuhn was a young girl, she watched her father slowly rot away and die from a disease nobody could cure. Swearing that she would never let anyone else experience such torment, she joined the faith of Elyun in order to better help others.

She is aware of Celica's identity as the Godslayer, but unlike other servants of the pantheon, she has no interest in a confrontation with him, as it would run counter to Elyun's precepts of healing and charity. On the contrary, she shows great concern for Celica's health, and vows to find a way to help him recover the strength he has lost. Her obsession threatens to get the better of her; when nothing else seems to work, she prepares to offer a human sacrifice to him - herself. 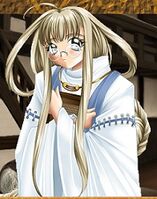