She originally served one of the Old Gods during their war with the new pantheon. As the situation grew more dire, her master began to consider selecting a few mortal champions to receive his power and fight in his defense. Ilzave was strongly opposed to this plan, believing that such humans would eventually surpass and overthrow the gods who had empowered them. The plan was abandoned, and not long after, Ilzave's god was defeated and sealed away. Ordinarily, angels without masters fall and become demons; however, in his victory, Marsterria offered Ilzave a choice - serve him, the one responsible for her master's defeat.

Ilzave accepted, and was eventually tasked with guarding the valkyrie Schweltleite, sealed away in her castle underground. This she did faithfully, placing a network of magical defenses in the caves above - although despite her apparent loyalty, Marsterria continued to send other servants as observers. Her prisoner did not rest quietly; she struck a bargain with the power-hungry magician Abeloos Casserly, who kidnapped Princess Latina of Rewinia and sacrificed her in order to break the seal. Ilzave was barely able to prevent Schweltleite from being freed, but from this point onward, the wizard and his minions maintained a presence in the upper tunnels, always waiting for a chance to strike again.

Eventually the activities in the mine attract the attention of both Latina's betrothed, Lorrain, and the forces of Rewinia - Celica among them. This gives Ilzave the opportunity she needs to destroy her enemy. Using the priestess Roca Ruscourt, she discreetly passes Celica the tools he needs to progress further into the mine, orchestrating a three-way battle between the forces of Abeloos, Lorrain, and Rewinia. She also convinces Abeloos' subordinate Wendice to betray her master in exchange for power - neglecting to mention that the power is great enough to destroy her. By the time Celica reaches the buried castle, he is the only source of resistance remaining, and Ilzave orders Roca to kill the Godslayer. However, Roca has fallen for Celica during their earlier adventures and refuses to do so, prompting Ilzave to attempt to kill her. This proves to be a mistake, as the sight causes Celica's weakened powers to return in full force, allowing him to quickly defeat the angel and strip him of her power.

Celica repeatedly orders Ilzave to surrender to him, but she refuses until he offers the option of serving him instead of Marsterria. Hearing this, she agrees at once, and Celica eliminates the spell that forced him to do the god's bidding. The angel then surprises him by swearing loyalty without hesitation. When questioned, she explains that Celica's stolen divine powers make him a living example of what her first master had tried to create so long ago; if Celica is able to surpass the gods, it will prove that she was right in the end. So that she might see it happen, she will remain close and fight under his command.

Ilzave continues to serve Celica faithfully as the conflict with the Seven Elder Demons begins. However, eventually the allies fall into a trap set by their foes. Celica is captured, and his companions - including Ilzave - are scattered. Once again finding herself an angel without a master, she returns to serving Archbishop Pleiades and the Church of Marsterria.

This inevitably leads to a confrontation between the angel and Celica's maids during their raid on Marsterria's main temple. Already doubting Pleiades' methods and his obsession with power, she nonetheless has no choice but to fight to defend her post. However, she obeys only the letter of her orders, offering no pursuit when the maids manage to slip past her.

When Roca later returns to the temple to challenge Pleiades' rule, Ilzave once again must fight against a former ally. This time it is the hero Elishe who accompanies her. Seeing an opportunity, Ilzave accepts the swordsman's demand for a battle, allowing Roca to challenge Pleiades without interference.

Rather than return to Celica after Pleiades' defeat, Ilzave swears loyalty to Roca, finally confident in a master who will act in the church's best interests. 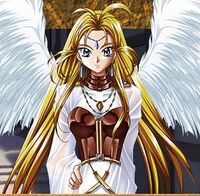