Chronologically the game occurs after the events of Battle Goddess Verita and before La DEA of Libra. Geographically it is set south of the Avatar region.

The game features 3 routes, one for each main heroine (Yuela, Serawi, and Emilita). The route you take changes which of the three you romance, as well as unlocking specific quests.

The game spans beyond one dungeon with outdoor battles and at least one city to spend time in between battles. Has an overworld map and you can see where the game takes place geographically compared to other Eushully games.

There are now unique recruitable monster girls and other characters with more events for them, rather than having an army of generic monsters (which makes this a RPG and not a warfare-oriented SLG like Himegari Dungeon Meister). A character reaching 0 HP is only knocked out of the field for the current play of a map, they're not killed for good and can be present the next time you explore a location.

You have a workshop and item creation that is far more extensive than Dungeon Meister's. You can assign units to be shopkeepers and upgrade the shop to make it more effective.

Items can be synthesised and used to give your characters new abilities and skills, or be sold at your shop.

Units can equip three different items at once - a weapon and 2 accessories.

Major characters can change into outfits with different elemental properties - however, this limits them to 1 accessory.

Adjacent allies can perform support, attack, or defense actions. Specific units can perform an  union attack together, provided that the skill is equipped.

Monsters have a base level in each map but will scale to the average level of your party if it exceeds that minimum level, up to a cap. It is possible to remove the cap for second, third, etc playthroughs.

The current fully upgraded state of the game is 2.0, with three append disc extras (Special Alchemy, Hannah's Pilgrimage, and the v2.00 expansion).

This game has been translated into english by Tenka Seiha. You can download the patch from their official site:

The patches have been removed.

Note that the patch requires all append discs of the game installed in order of their times of release (as mentioned in the above section), or else the translation patch may malfunction.

Please note at this time we are starting to translate (using the above patch) and are continuing to add information to the wiki. Feel free to leave or add the Japanese names of items, enemies, and skills. However, to save space, most (if not all) of the other information should be in English.

In other words: We cannot be sure of everyone's update or translation state, so if possible, leave the Japanese for items IN THE SECTION MEANT FOR THEM. For example, append the EN name to the JP name of monsters in the Monsters section, but wherever else they appear (in Items and Stages), ONLY KEEP THE ENGLISH.

This is to allow us to present the information necessary to those who must use the vanilla version, unpatched version, or otherwise. 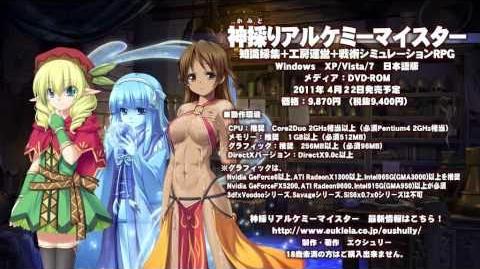 The full version of this game EUDV-012 was released on April 22, 2011, along with a preorder bonus disc (特殊錬金ディスク) containing an Append feature as well as concept art and wallpapers.

On November 4, 2011, the パーフェクトガイドブック (Perfect Guidebook) was released in conjunction with Enterbrain on their netshop. In addition to a number of features bringing insight into the Alchemy Meister universe, such as audio dramas, a CD-Rom was also included with the 2.0 upgrade, which also adds numerous things (such as more items and a hellishly hard EX map) to the main game. Unlike the previous patches, this update currently does not appear in the support section as it is a paid expansion, available only with the perfect guidebook at this time. The Perfect Guidebook costs approximately 3675 Yen.