Ghrok Bhrem is a greedy, money-grubbing merchant who operates in the town of Milphe. He sells weapons, armor, and other items.

When Ghrok first met Celica, he identifies him as a man of some status among the Rewinian detachment. Seeing the opportunity for a profitable relationship, he does his best to remain in Celica's good graces, being obsequious to the point of annoyance. He owns a young slave named Saria who does menial fetching and carrying for him; however, he frequently becomes angry with her clumsiness, and ultimately considers her to be more trouble than she is worth.

At some point before the game begins, Ghrok purchased a magical rod from the wife of old man Zenn, one of the townspeople. When Celica learns that he needs the rod to proceed further into the Cadora Mine, a deal was struck. Having noticed a griffin flying overhead some time earlier, Ghrok requests that Celica bring him its eggs, which will fetch a considerable sum. Celica asks that the merchant hand over his ownership of Sarria instead of the original cash reward, which Ghrok is all too happy to do. 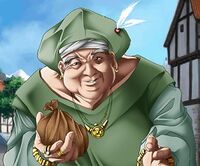