The bloodthirsty berserker Dorgius is one of the mercenaries serving Abeloos Casserly.

Like the sorceress Wendice Prana, he is one of the mad wizard's chief agents. However, Dorgius and Wendice do not get along together; while Wendice prefers to work with subtlety and avoids taking life unless necessary, Dorgius is brutal to the extreme, delighting in violence and slaughter for the sheer joy of it. In battle, he makes little distinction between friend and foe, and is as likely to kill one of his own men for getting in his way as to attack the enemy.

He first encounters Celica while raiding a hidden elf village for captives. Contrary to Abeloos' orders, Dorgius is in the process of massacring most of the village's population as the Godslayer arrives. Celica walks in as he is on the verge of killing the elf warrior Lue; the interruption drives him furious, but when he is unable to defeat Celica in combat, he quickly flees. Lue vows revenge for the death of her people, and soon slips into the Cadora Mine with the intent of hunting the berserker down.

As Celica works his way deeper into the mine, he eventually discovers Dorgius again as he's making short work of some of Lorrain's soldiers. The two fight a second time, but once again, Dorgius is forced to retreat. Furious at losing yet again, he goes to Abeloos and demands that the wizard use his magic to make Dorgius stronger. Amused, Abeloos eventually consents to seal a demon within the warrior's axe, which does indeed make him inhumanly powerful; he neglects to inform Dorgius that the demon will feed off of his soul in the process and eventually kill him.

When the combined forces of Abeloos and the angel Ilzave launch an ambush of Lorrain and his men on the ninth level, Lue takes this opportunity to take her revenge. She finds herself unprepared to defeat the newly-empowered Dorgius, and Celica joins in the battle. With great difficulty, they are able to defeat the berserker, and Lue kills him once and for all. 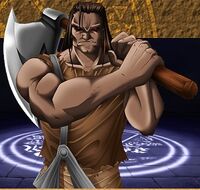 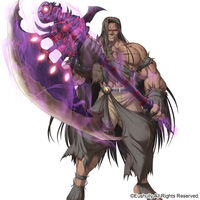