Celica or Serika is the protagonist of the Battle Goddess series. Originally human, he achieved immortality when he took over the body of goddess Astraea and acquired the title Godslayer. In the Battle Goddess Zero, it tells the story of Celica from being a human into becoming the infamous Godslayer which is divided into four Arcs/Eras.

Celica was the second child of a Barouhart priest and a Steinlurla miko. He was born in the village of Keet. His mother mother died from a monster wounds when giving birth to him. His father was always out on errands for the Macl Barouhart temple, or working for peace with the Steinlurlans. Even when he was home, he busied himself practicing swordsmanship until late at night. As a result, Celica was primarily raised by the other villagers of Keet. When his father passed away, Serika and his sister Kaya moved to Macl and entered the service of Barouhart, following their father's footsteps.

Celica was raised as a Priest Warrior of the God of Storms, Barouhart. Possessing a heart of justice, excellent swordsmanship and magical abilities, people also referred to him as a hero. However, he did not like to be called a hero; he fought simply to protect the happiness of others. He cared much less about himself, and his daily life is fairly sloppy.

His weapon of choice is the long sword and he uses the "Flying Swallow Sword" style of swordsmanship which he learned from Dalnos.

That sentence pretty much sums up all of the Second Era. In chapters 4-5 of Battle Goddess 0, Celica wakes up with his new appearance, steals some clothes from a soldier, meets magician Abeloos and his familiar, explores dungeons around Abeloos' base, returns to Barouhart's temple and meets Haishera which leads to the next Era.

It is in this era where he is called the "Seed of Disaster", a man in the body of a god; a being who should not exist.

Anyhow, this happens during chapter 6-7 of Battle Goddess Zero. As the name says it isn't really Celica but Haishera in the Godslayer's body. This Era is about how Haishera overthrows, defends and destroys a kingdom. It is like many visual novels divided into many endings. These decide if she is worshiped, feared or hated by everyone and if a character is going to join in the 4th Era.

In Battle Goddess Verita, canon is that after many atrocities, Haishera was eventually defeated by the temple of Marsterria, and dispersed her demon army to prevent their deaths.

Celica eventually reawakens and regains control of the body which lead to the 4th Era.

-Reawakening of Celica until showdown with Aidos-

A Century passed, and Celica once again awoke, having no memory of even who he is when he is attacked by the mystery shadow. After he escapes the mine in which he woke up, he meets Hakuginkou, who fills him in on himself. Hakuginkou arranges (with many incentives) for traveling merchant Shamara to employ him as a guard. Shamara resembles Kaya, and the pair lead a simple life until he finds out the identity of the shadow from Luna=Clear and Rekushumi and regains some of his lost memory. He has to give up his traveling and treasure hunting with Shamara, to fulfill his duty as Godslayer and his promise to Satia. In order for Celica to defeat the mystery shadow, the impure Goddess of Kindness, and Satia's younger sister Aidos, he gains Haishera's power from defeating her and seals her inside a sword. Luna=Clear opens a passage to Gods' Graveyard, which seals Gods' divinity. Celica enters the graveyard and defeats Aidos, losing his memory once again in the process.

-Storyline of Verita and onward-

This is pretty much the same as the 4th Era but without the memory of the 4th Era. I won't say it start from Verita, since It begins at the end of Battle Goddess 0, after defeating the last boss and disbanding the party, he have amnesia. With only he and a talking sword, they talk and remembering Haishera (the name only), he cut his hair and begin his journey. this lead to some appearance in eushully games like Princess General 2 and to Battle Goddess Verita, Battle Goddess and Battle Goddess 2.

Celica Sylphil is an infamous Godslayer, known for killing the goddess Astraea and taking over her body. With the goddess's body, he transcends mortality and became one of the Godly. The Ancient Gods want to kill him to avenge Astraea. The Present Gods cannot permit the existence of mortals who dared to challenge the gods. Various Demon Gods and other beings of great power hunger after the body of the goddess and want to make it their own. And thus, Celica is almost a common enemy to all. Luckily the Miko of Water of Rewinia is willing to take him in and provide him with a resting place. 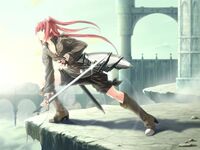 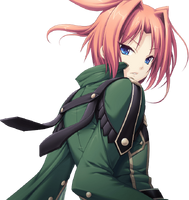 Celica in La DEA of Libra 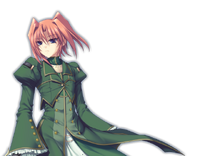