An excellent, meritorious 2nd year student of Tengyo Middle School. He has been aiming to be a doctor ever since having received advanced medical care in childhood. A reliable, grown-up man, but he has a prankster side to himself too, and plays jokes on his close friends at times. However, in spite of his good manners, etiquette and all other merits, he's known to his entire class as one having a very severe case of sister complex.

Blood related younger sister of Syuya. Forms the group "Imoutos" along with her best friends Arisa and Shaneorka. While she adores her elder brother who looked after her in place of their parents, she wants to start living on her own now. Loves to eat nan and gets offended if someone so much as considers eating it in a way it's not meant to be eaten. Seems to have a secret brother complex. 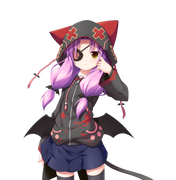 The somewhat eccentric leader of the loli team "Imoutos". From time to time, she comes up with ideas for weird, wild activities. She becomes a new friend of Senzaki Mirai and she loves her Mirai who automatically replacing Syaneorka's friend.

The motherly figure of "Imoutos", she's the one with most common sense as well as chest size in the group. She's somewhat of a pushover but has a gentle and benevolent heart. Her relatively well-endowed bosom for her stature often becomes the target of Mirai's jealousy. Nicknamed "Chanel" (pronounced "Shaneru") as her long name is difficult to memorize, she's a top class cook. However, whenever she gets to cooking, her personality completely changes to that of an (as Mirai would put it) ogre. 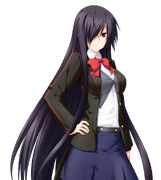 The heiress to Mitaka Ceramics, a huge organization in the country, and the Student Council President. She has greater influence in the school than even its teachers. She's an elite who received special education and training, yet continues to work hard. Efficient in swordplay and Jujitsu. Supposedly has a political rivalry with the Shiina faction.

A tomboyish, easygoing girl in the same class as Syuya. Because of her tomboyishness she's barely even considered feminine by boys, much to her displeasure. But as a result, she's close friends with both Syuya and Kaitou. She founded the Gymnastics club, but is facing difficulties recruiting members. 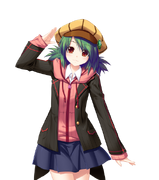 Head of "News Flash with a Splash!" (ズバッと新聞部), one of the many newspapers of the school and a photographer. A 3rd year. 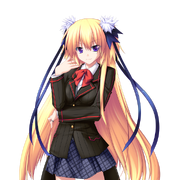 Daughter of the family that's one of the founders of MHI (Millennium Heavy Industries). A typical haughty Ojou-sama type, she finds it annoying to get along with the "ordinary" students, to such an extent that there are rumors of her actually getting a separate classroom reserved solely for her own use...

A loner with a frigid attitude. She's so detached from her surroundings that she sometimes even forgets the presence of teachers in the classroom and vice-versa. She's an excellent archer. 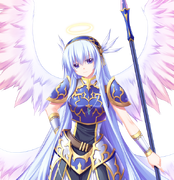 Belonging to the angel race that is not of this world, she's an archangel with tremendous combat prowess. Because of her ruthlessness in combat, she's often sent to the front-lines in battles.

A male student in the same class as Syuya, he became good friends with Syuya and Akari in their 1st year. He's a hardcore gaming maniac and has a tendency to start games anytime, anywhere, whenever he has free time.

Father of the Senzaki siblings.

Mother of the Senzaki siblings.

Originally an angel, he fell into devildom, becoming a "fallen angel". Rather than being serious, he often acts like a jester. However, for some reason, he takes interest in Shuuya...

A devil. Being able to manipulate life and death, she's called a Shinigami (Death God). With extreme combat abilities deceptive of her small stature, she fights against angels more for self-enjoyment than anything else. 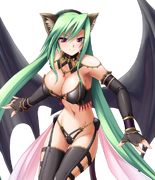 A devil. Subordinate of succubus queen Syfira. Has a carefree attitude and loves lazing around. Loved as an elder sister by her succubus companions. Fights with angels half for fun. When the human world descends into her world, she goes to investigate out of curiosity and meets Shuuya.

The man who has made the most new technological discoveries, even among the cutting edge research of MHI. As one of the founders of MHI, his name is renowned throughout the world. A true scientist, he normally confines himself to the MHI headquarters while leaving public relations of the company to Shiina. Despite this, as the man who has had a hand in almost everything invented in MHI, his influence in the company very strong.

The female principal of one of the charities MHI runs, Niyu Morning School, and the foster parent of Shuuya and Mirai. However, her real profession is Dr Miyahara's assistant scientist. Does not seem to mind having a mechanical body.

Sister of Masaho. In her search for herself, she devotes herself to training at the church. While intelligent, she blindly believes in god, to the point where her devotion is expressed through the clothes she wears.

6th Rank Angel, Power[1]. The father figure to the elite angel force "Punishment Force". While leading his allies through victory at the vanguard, he does not hesitate to battle fated enemy Ernst, with whom he seems to have formed a unique relationship over the years. 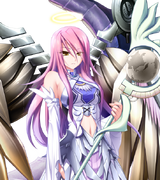 Like Ragutas, she is a 6th Rank Angel, Power. She has a calm demeanor and takes a long sighted view of the future. Together with angel leader Norufaza, she promotes the protection of humans. This is because she believes only humans possess the hidden power to "change destiny" and ultimately decide the battle between angels and devils. She personally searches for humans with the potential to become heroes

2nd Rank Angel, Cherubim[2]. Ganoel is the creator of the Dream World (夢境) used to seal Hargenti. Despite her great power, she struggles to resist Hargenti's corrupting influence on her, and part of her already under his influence manifests itself as "Shadow". 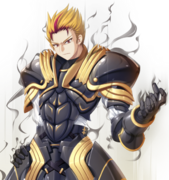 A devil so powerful it took the strength of 2nd rank angel, Ganoel, just to seal him, he influences the real world by whispering to the minds of humans, tempting them into a contract with him. One of 72 pillars of Solomon.

Haishera, she is a Mysterious Teacher in the Second Academy. Due to her personality, she is surprisingly favored by her students.

Haishera is the infamous "Demon God (Majin) of Earth" from the Battle Goddess series.

Third Second Year student Wilfred whose President of woodwork Club. He is a 2nd year student, but he is left back once cause he only focuses in Artisan work. As a senpai, he is called Wil-san by others. As he says, 'Speak out about your problems, and I, the Artisan, will take care of it'. He kept many pets as a mean to gather materials, pets like a dog, a cat, a swan, a fox and even some larger creatures like a whale. (each pet represents Wil's Allies in Kamidori.) 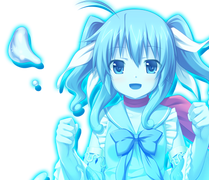 Appears in the "Chronicles of Water Girl" side story, which can be accessed at NTD building Floor 2 during Chapter 2 or later. Does not appear in the main story.

Short Summary: The world where Angels, Devils and Creators live. A world ruled by "survival of the fittest". The weak Creators live in fear of being killed by Devils or Danger Beings. One day, Tiene and her brother encounter a Devil. Her brother was killed, and with his last breath he wish to "save his sister". Ryukafrost was summoned from the wish, giving Tiene the strength to defend herself and allowing her to "fusion transform" into Ryukaiser.

There are 2 scenes in this side story, lose the battle just after the first for 1 and complete the story for the other. 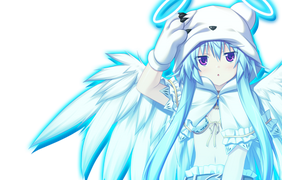 Appears in the "Midsummer's Triangle" side story, which can be accessed at NTD building Floor 2 during Chapter 2 or later. Does not appear in the main story.

She is an angel who wears a bear costume, unlike Ragutas who is really a bear. Also called Kokuma-chan(Little Bear) by Ernst.

She is like an assistant of Ragutas, often calling him Onii-chan and sometimes Aniki. This is a story of Vafuma's Encounter with Ernst and her relation with Ragutas.

There is only 1 scene for this side story.

中文
Community content is available under CC-BY-SA unless otherwise noted.