Alicia is a villager from the town of Milphe.

Shortly after Celica arrives in town to join in the Rewinian mission, Alicia and her father Rand are ambushed in the countryside by the Black Foxes, a local gang of bandits. Rand manages to stumble back to town, but Alicia is captured and raped by the bandits before Celica can rescue her.

She is left withdrawn and morose by her ordeal, and doesn't even respond to visitors in her home. It is only with patience and a lot of coaxing that Celica eventually gets her to open up again, returning to her normal cheerful self. However, she soon suffers a relapse when she realizes that she may be pregnant, a fear which Celica and Haishera are able to confirm. Ultimately he uses his abilities to terminate the baby, on the pretext of sleeping with her as proof that she hasn't been permanently "soiled" by the bandits' attack. 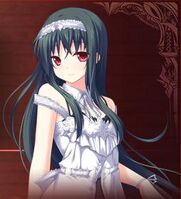 In La DEA of Libra
Community content is available under CC-BY-SA unless otherwise noted.
Advertisement