Abeloos Casserly was a mage who lived in the underground city of Fnorro and helped people.

We are introduced to Abeloos as a young magician who dreams of establishing a nation where the Dwellers of the Dark may live in peace, along with his familiar Peruru.

He chances upon Celica Sylphil wandering the labyrinth the underground city of Fnorro is built in slaying monsters for their life force. Sensing Celica's unique aura, he invites Celica to his home and lends him Peruru to help him recover his strength.

However, his dream, coupled with his infatuation with Celica, who had the body of a goddess and a feminine appearance, eventually corrupts him and drives him crazy as he becomes obsessed with obtaining the body of the goddess. As a result of exerting too much power in his attempt to claim the body of the goddess, he loses his youthful appearance and much of his strength. However, for reasons unexplained, he not die of old age and instead wanders the continent for decades in search of power.

He becomes strong enough to forcibly to gain control of Naberius, the guardian of the Dark Road that leads to the netherworld, whom he used to lure Celica, and subsequently follows Celica into the Palace of the Interval. There, he is defeated by Celica, but before Celica could put an end to his life, he throws himself off the edge into the dimensional gap.

We are reintroduced to Abeloos as a frail, semi mad old man wandering around God's Graveyard with Amdusias and Zono Di, looking for a way to return to Dir Lifyna.

After Bureado Casserly is defeated by Celica in God's Graveyard, he eats Bureado's soulstone and absorbs his power. Seeing this, Amdusias attempts to kill him, but being weakened by her own fight with Bureado, is unable to do so, and is instead sealed by Abeloos as a book.

Years later, he is responsible for laying the basis for the ritual to revive Evil Dragon Aracale using the soul of Irina Teshuos who was absorbed by him when he ate the soulstone of Bureado. He fails in the revival attempt after being defeated by Louie Marshrun.

He is responsible for certain events behind the scenes and is subsequently defeated by Celica. 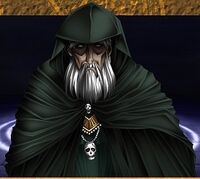 Abeloos in the original Battle Goddess

Abeloos in La DEA of Libra 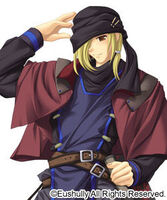